Portrait of an Artist as a Gay Man

I've been in Brighton Filming the launch of Vince's B.Right.On Festival. There were two events today - a launch of the festival at City Hall at 3pm and a launch of Vince's exhibition BANNED in the library at 7pm. The library event was stunning. There was so many people and Vince's idea to paint 78 people with the names of countries where homosexuality is banned was genius. Over 100 people joined in so there was some doubles but very effective and very moving. Here's a pic Sam Collins took of me filming some of Vince's art. 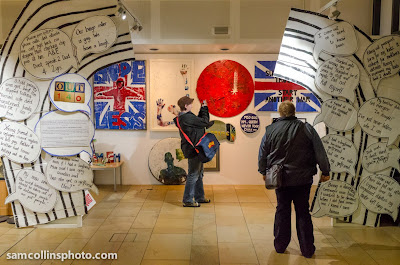 Shelly Telly
I'm Michelle Savage, a freelance filmmaker and trainer from Norwich in the UK. I specialise in working with community groups. Everyone who works with me gets a superman-style Action tshirt and gets to join my Action Crew. I'm also one of the organisers of Norwich Pride, the celebration from the LGBT community for everyone, so you'll read quite a lot about LGBT stuff on my blog too (LGBT = lesbian, gay, bisexual and transgender).